Harry Potter and the Chamber of Secrets | Bow Tie Cinemas
SCREAM IS NOW PLAYING ONLY IN THEATERS! 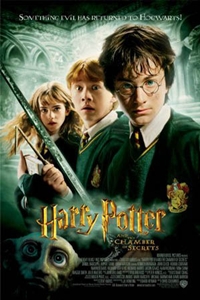 Harry Potter has not had a good summer. Not only has he had to put up with his overbearing Aunt Petunia and Uncle Vernon Dursley and their dread of his magical abilities, but also it seems as if Harry's best friends Ron Weasley and Hermione Granger have forgotten him, as they haven't replied to a single one of his letters. Then, suddenly and mysteriously, house-elf Dobby appears in Harry's bedroom and warns him of great danger if he should attempt to return to Hogwarts School of Witchcraft and Wizardry. But despite the elf's mischievous efforts to thwart Harry's return to school, the ever-determined Harry is rescued from the Dursley's dreary clutches by Ron and his brothers and whisked into the warmth of the Weasley household. Upon arriving at Hogwarts, Harry finds that his first year heroics have caused him to become the center of much unwanted attention. His new fans include Ron's little sister Ginny; first year would-be photographer Colin Creevey; and most irritatingly, the New Defense Against the Dark Arts Professor, Gilderoy Lockhart. Outshone only by his own vanity, Lockhart craves the attention that Harry shuns. But not even Lockhart can offer an explanation for the sinister new terror that is gripping the school.